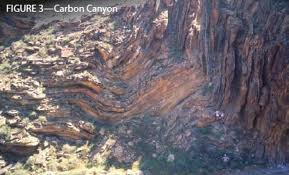 By Andrew A. Snelling
How could a series of sedimentary layers fold without fracturing?
The only way is for all the sedimentary layers to be laid down in
rapid succession and then be folded while still soft and pliable.
If the global Flood, as described in
Genesis 7 and 8, really occurred,
what evidence would we expect
to find? Wouldn’t we expect to find
rock layers all over the earth that are
filled with billions of dead animals
and plants that were rapidly buried
and fossilized in sand, mud, and lime?
Yes, and that’s exactly what we find.
This article concludes a series on
the six main geologic evidences that
testify to the Genesis Flood.
The fossil-bearing geologic record
consists of tens of thousands of feet
of sedimentary layers, though not all
these layers are found everywhere
around the globe, and their thickness
varies from place to place. At most locations
only a small portion is available to view, such
as about 4,500 feet (1371 m) of strata in the
walls of the Grand canyon.
Uniformitarian (long-age) geologists believe that
these sedimentary layers were deposited and
deformed over the past 500 million years. if it
really did take millions of years, then
individual sediment layers would
have been deposited slowly and the
sequences would have been laid down
sporadically. in contrast, if the global
cataclysmic Genesis Flood deposited
all these strata in a little more than a
year, then the individual layers would
have been deposited in rapid succession,
one on top of the other.
Do we see evidence in the walls of
the Grand canyon that the sedimentary layers
were all laid down in quick succession? Yes, absolutely!

click here to finish article:
http://www.answersingenesis.org/contents/379/am/v4/n2/rock-layers.pdf
Posted by Profile at 7:17 PM No comments:

Much Evidence Exists for a Worldwide Flood

http://www.icr.org/geological-strata/
Twentieth-century geologists taught the familiar maxim: "The present is the key to the past."
But now that catastrophic processes are widely employed to describe the strata record, twenty-first century geologists are wondering whether "marine flood sedimentation is the key to the past."
Geological strata and their contained marine fossils provide critical evidence that the ocean once covered the continents, even the highest continental areas. Extremely widespread strata blankets argue for an intercontinental or global flood.
The Sauk Sequence extends throughout North America and appears to extend into Europe. The Tippecanoe Sequence also covers much of North America and may well extend into Europe and Africa. There are also intercontinental redbed sequences, intercontinental tuff beds, and coal-bearing strata cycles.
Granular, water-charged sediment flows result in very rapid stratification. Dilute flows produce thick sequences of plane beds, graded beds, and crossbeds by sustained unidirectional flow. Such flows also produce thick sequences of hummocky beds by sustained bidirectional flow.
Concentrated sediment flows produce thick strata sequences by abrupt deposition from liquefied suspension or evenly bedded strata by flow transformation to a tractive current.
These and many other obvious processes are leading many geologists to construct a global flood model for earth history.
Posted by Profile at 9:41 AM No comments: 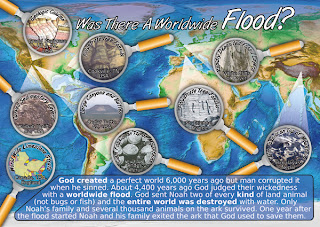 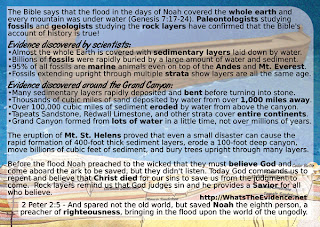